The Gary Bisbee Show is a weekly podcast discussing how leading health system CEOs and healthcare leaders are navigating the evolving healthcare landscape while leading high-performing teams and driving innovation across the industry.
Listen on your favorite player 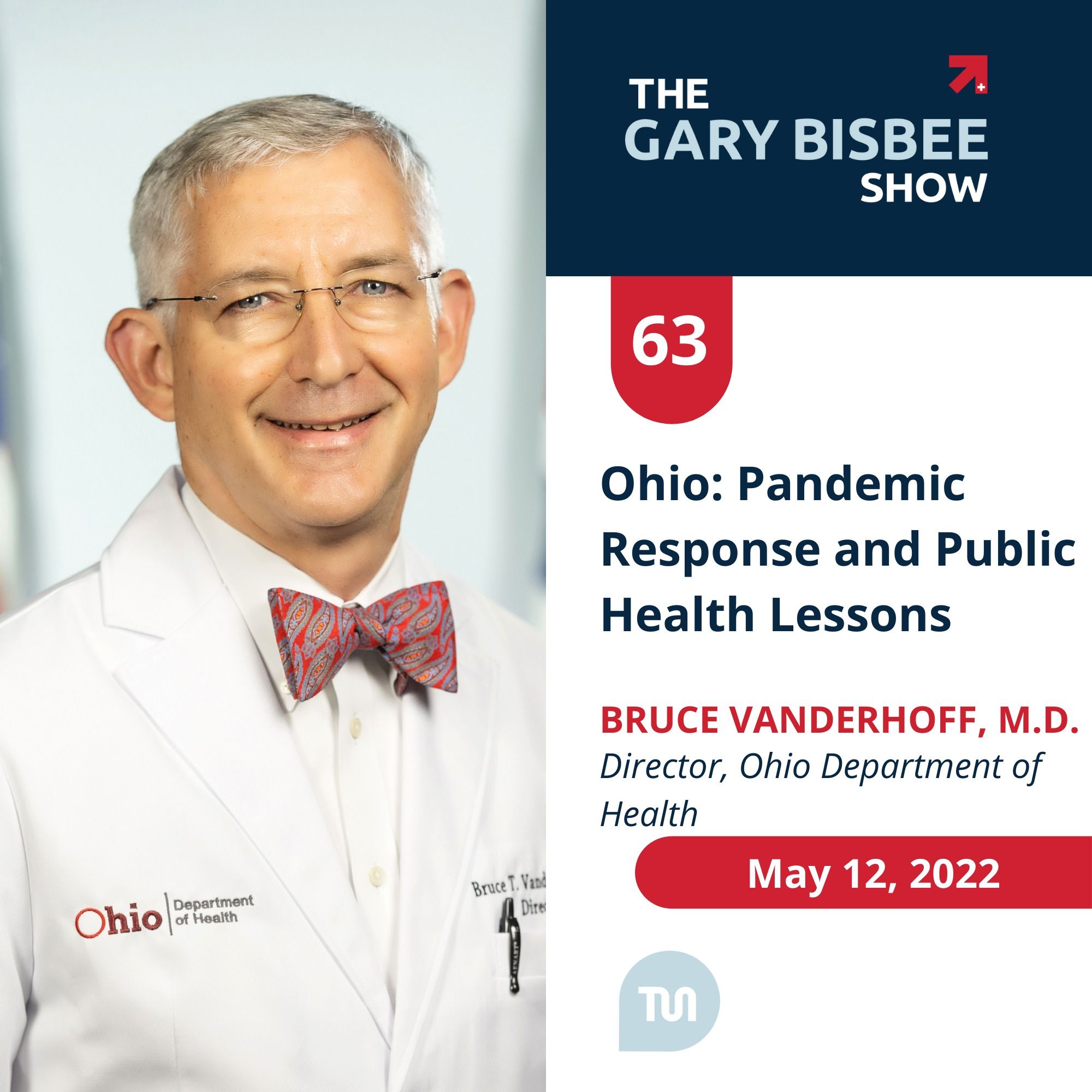 Meet Bruce Vanderhoff, M.D.:Bruce Vanderhoff, M.D. is the Director of the Ohio Department of Health. Before his directorship, he was the department’s Chief Medical Officer. Prior to that, Dr. Vanderhoff served in a variety of roles at OhioHealth, including the Senior VP, Chief Medical Officer, and VP of Medical Education, Quality, and Patient Safety. He also practiced as a family medicine physician. Dr. Vanderhoff received his M.D. from the University of Pennsylvania and an MBA from Franklin University.Key Insights:Dr. Vanderhoff dives into pandemic management and leadership lessons from a state government perspective.Ohio’s Vax-a-Million. Dr. Vanderhoff described the design behind Ohio’s vaccine lottery. The goal was to incentivize people that were inclined to get the vaccine, but hadn’t done so yet. Two weeks after the program was announced, there was a 28% increase in the number of people getting vaccinated. (3:33)Lessons for Public Health. Dr. Vanderhoff emphasized that we cannot predict all potential public health threats. However, we know that people who are healthy are better able to weather pandemics and other health challenges compared to people who are unhealthy. Thus, improving the overall health of people is a crucial part of preparation for future public health threats. (19:58)Problem Solving Methodology. To achieve big goals, Dr. Vanderhoff recommends designing a plan that is iterative, that breaks down the problem into smaller steps. He also points to the importance of understanding lived experience. Seek out perspectives from workers on the frontlines before formulating solutions to their problems. (33:35)Relevant Links:Read more about Dr. VanderhoffRead “DeWine names Dr. Bruce Vanderhoff as the Ohio Department of Health's new director”
Read More 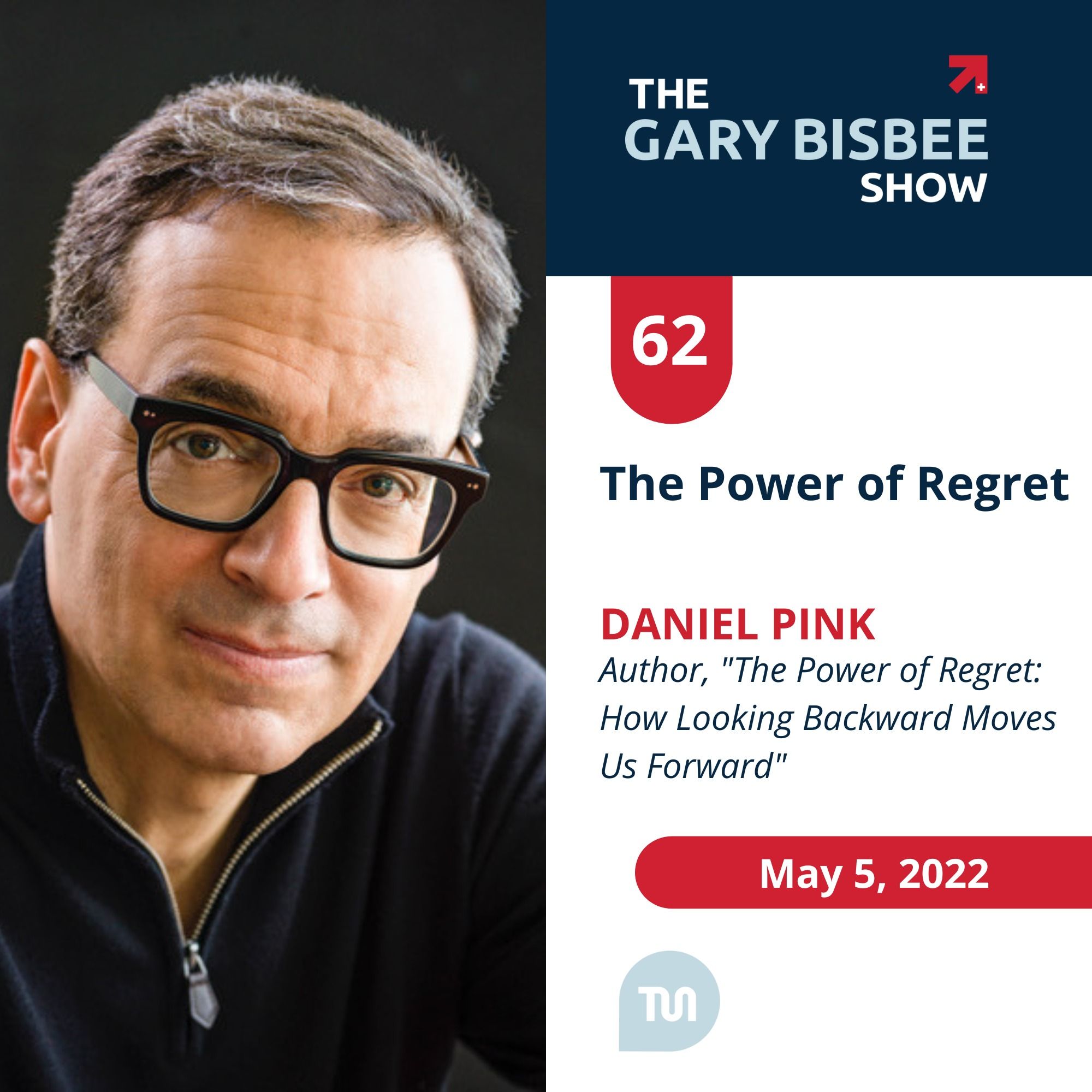 Meet Daniel Pink:Daniel Pink is the author of five New York Times bestsellers aboutbusiness, work, creativity, and behavior. His latest is “The Power of Regret: How Looking Backward Moves Us Forward.” Daniel hosts a MasterClass on sales and persuasion, and he contributes to in The New York Times, Harvard Business Review, The Atlantic, and Slate. Previously, Daniel was the host and co-executive producer of the television show “Crowd Control.” Daniel received a B.A. from Northwestern University, and a JD from Yale Law School.Key Insights:Regret is a complex, but common negative emotion. It is uncomfortable, but when confronted, it can be transformative.Transformational Regret. Reflecting on regret has been found to decrease cognitive biases, and improve skills related to problem solving, strategy, and negotiation. Daniel shares research that showed that participants who were asked to reflect on what they regretted about a previous negotiation exercise did better in the next negotiation. (12:05)Four Categories of Regret. Through his research, Daniel found four core regrets. foundational regrets are about stability, often related to finances or health. Boldness regrets are about taking chances, like traveling or starting a business. Moral regrets are about doing the right thing. Lastly, connection regrets are related to the loss of relationships. The most common regrets are connection regrets. (17:08)How Leaders Can Use Regret. Daniel encourages leaders to share their regrets and mistakes. It creates an opportunity for powerful conversations about what can be learned from regrets and how to prevent future ones. It also helps normalize regret, which is important because regret is normal. (30:55)Relevant Links: Check out Daniel Pink’s websiteListen to the Pinkcast, Daniel Pink’s podcastRead “What Can We Learn from the Solace of ‘At Least’ and the Sting of ‘If Only’?” by Daniel Pink
Read More 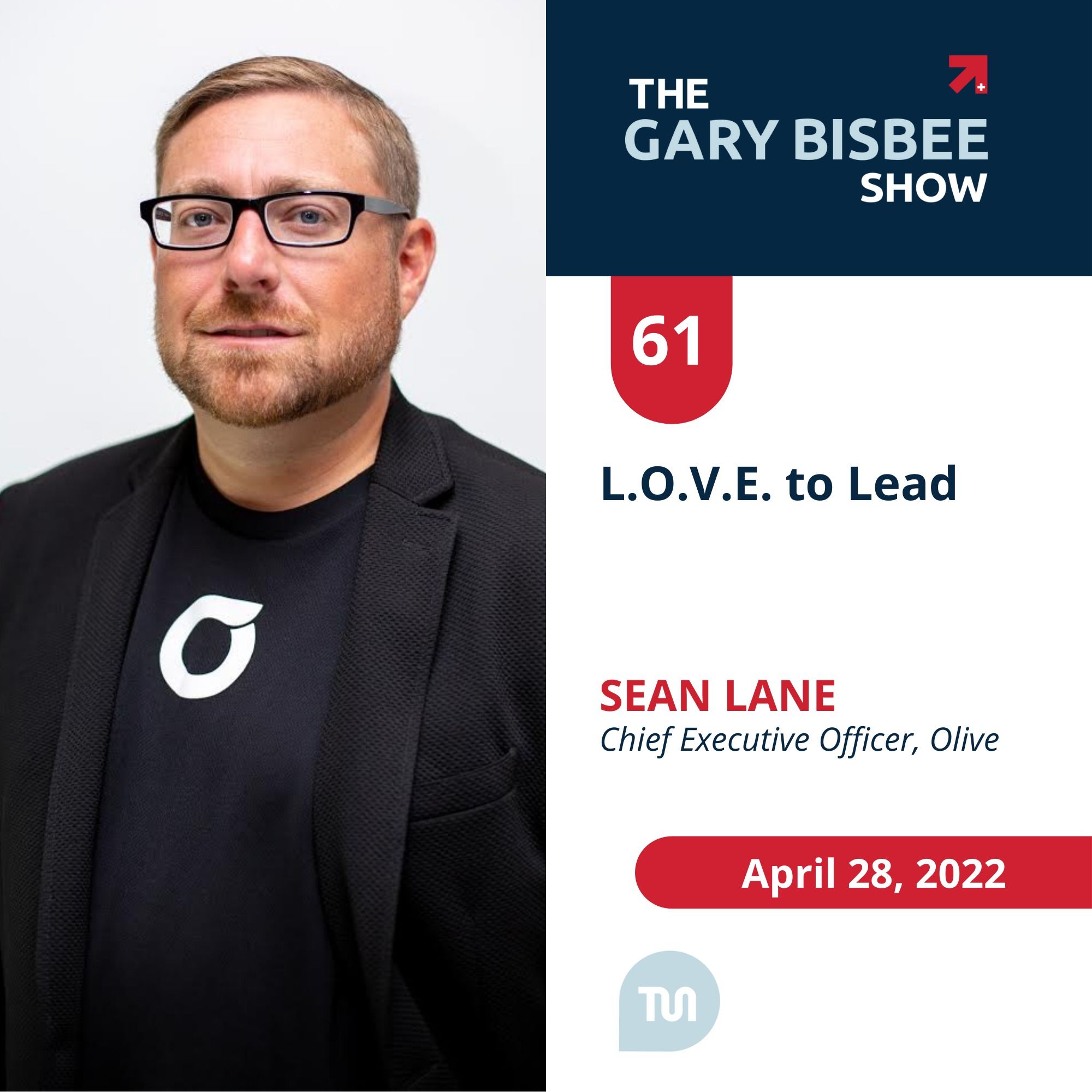 Meet Sean Lane:Sean Lane is the CEO of Olive and CEO of Circulo Health. Previously, he was an Intelligence Officer for the National Security Agency. He was also founder and Chairman of the Board for Betamore, Founder and Chairman Emeritus of Digital Harbor Foundation, and Founder of APX Labs. Sean received a Bachelor’s in Political Science and Government from Miami University. Key Insights:Sean Lane is freeing up healthcare’s scarcest resource: time. Explaining Olive. Olive is an automation company for healthcare. Olive herself is a virtual assistant that can learn to automate various administrative and operational tasks using artificial intelligence and deep learning. (10:58)Leadership Philosophy. Sean sums up his leadership methodology with the phrase “Love to lead.” Love is an acronym: “L” for leadership, because everything is a leadership problem; “O” for otherhood, to always think about others; “V” for vision, making vision a reality; and “E” for expectations, setting them clearly to avoid confusion and frustration. (22:29)Start Early. Sean became interested in leadership through the manuals and books his father brought home. Sean points out that now we have the internet! Take advantage of the vast resources around leadership, and decide what methodology you want to embrace. (29:24)Relevant Links: Learn more about OliveCheck out Sean’s websiteWatch “A plan to redirect a trillion dollars in the US healthcare system with Olive CEO Sean Lane”
Read More 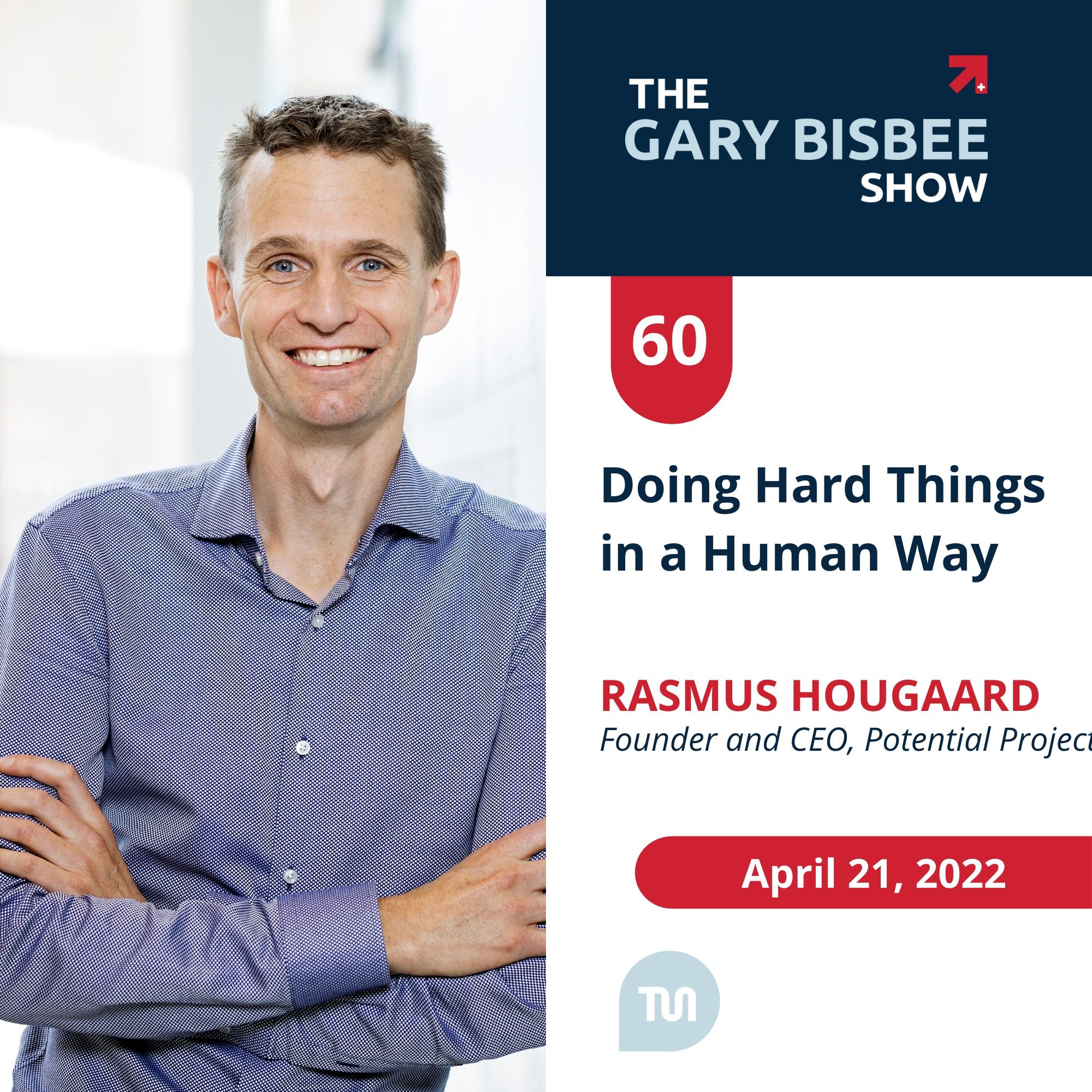 In this episode, Gary spoke with Rasmus Hougaard, founder and CEO of Potential Project, and author of “Compassionate Leadership: How to Do Hard Things in a Human Way.” They discussed the need for a new kind of leadership that emphasizes listening and compassion.
Read More 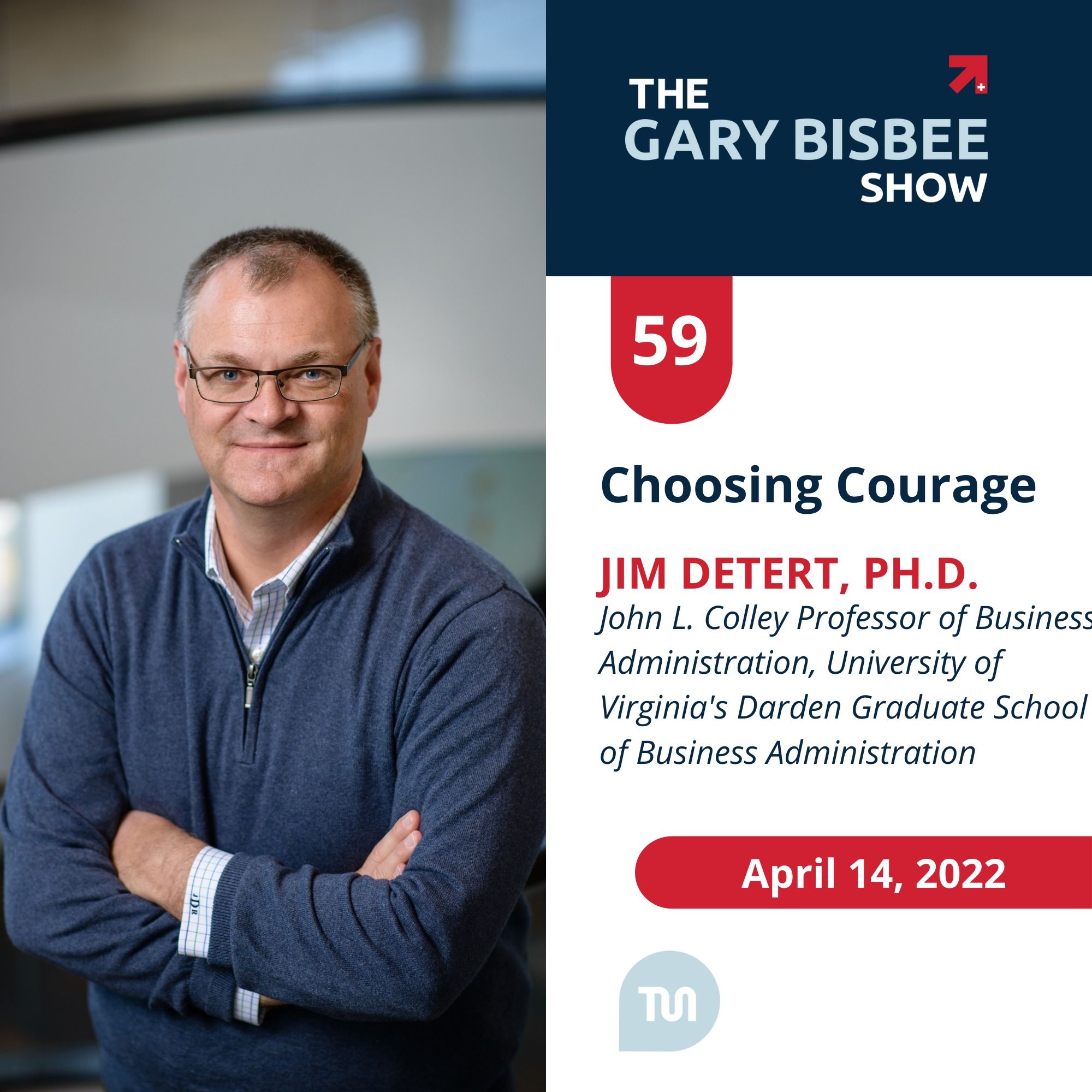 Meet Jim Detert:Jim Detert, Ph.D. is the John L. Colley Professor of Business Administration at the Darden Graduate School of Business Administration, and a Professor of Public Policy at the Batten School of Leadership and Public Policy at the University of Virginia. He is the author of “Choosing Courage: The Everyday Guide to Being Brave at Work.” Professor Detert received an M.A. in sociology and Ph.D. in organizational behavior from Harvard University. He also holds an MBA from the University of Minnesota and a BBA from the University of Wisconsin.Key Insights:Have you ever wanted to disagree with your boss, or make a tough decision you knew would be unpopular? Jim Detert, Ph.D. shows us how. Why Courage Matters. Courage matters firstly for ourselves. Acts of courage define our legacy, and our biggest regrets tend to be inactions. Secondly, courage is important for organizations. Courage is fundamental to innovation because innovation is about challenging the status quo. (11:16)Emotional Intelligence. Emotional Intelligence is not the lack of emotions, rather the ability to read other’s emotional state and channel your own emotions properly. Emotions are information. For example, if you give a presentation in a monotone way, it won’t garner any excitement for the idea. Similarly, ignoring a coworker’s reddening face won’t deescalate a situation. (24:36)How to Lead Courage. Leaders must acknowledge that fear exists and work towards a culture that promotes and protects courage. This includes modeling courageous actions, defending employees that are courageous, and examining potential barriers to bravery like financial and promotion incentives.(35:48)
Read More 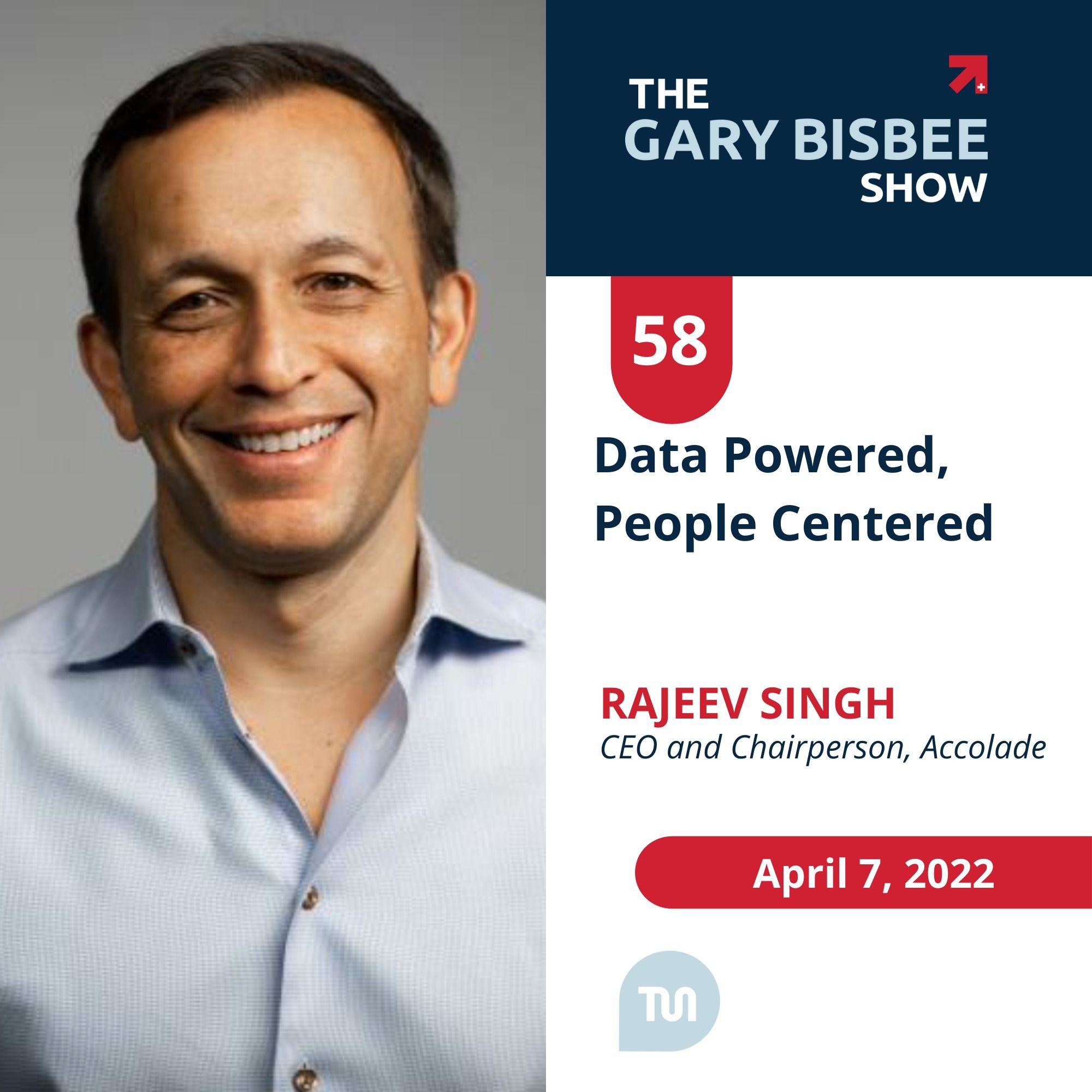 58: Data Powered, People Centered, with Rajeev Singh, CEO and Chairperson of the Board, Accolade

Meet Rajeev Singh:Rajeev Singh is the Accolade CEO and Chairperson. Accolade is transforming employer health benefits programs through providing personalized, continuous and integrated health services. He is also a board member of Avalara and Amperity, and a Trustee of the Seattle Children’s Hospital Foundation. Previously, Rajeev was Co-Founder, President and COO of Concur Technologies a highly successful company with a multi-billion dollar sale to SAP. He graduated with a B.S.E. from Western Michigan University. Key Insights:Rajeev Singh is a successful entrepreneur who pivoted to healthcare to make tangible, positive changes in people’s lives.Aligning on Mission. Rajeev emphasizes the importance of mission and values over objectives or measurables. Core values keeps a company aligned to its mission and moving in the right direction. It gives talented employees a compass to make decisions. (11:46) Aligning Incentives. Rajeev thinks the healthcare status quo exists because financial incentives are misaligned. To drive adoption, Accolade promised clients that if they didn’t see lowered costs and improved patient satisfaction, they didn’t have to pay. By delivering on those promises, Accolade has a nealry 100% retention rate from its customers. (17:41)Aligning Yourself. The key to being an effective leader and entrepreneur is first introspection. Understand yourself and your internal motivations. Second, read as much as you can. And third, have a solid foundation and support system of family and friends. (35:30)Relevant Links:Learn more about AccoladeFollow Rajeev on TwitterRead “Q&A with Rajeev Singh, CEO of Accolade”
Read More Founder and CEO, Think Medium
Dr. Gary Bisbee’s leadership positions have spanned Wall Street, academia, health policy and entrepreneurial ventures. He is Founder, Chairman and CEO of Think Medium, which explores learning and leadership through peer-to-peer conversations.
He is a frequent speaker and facilitator for executives and boards of directors. Gary is well published and he most recently co-authored, n=1: How the Uniqueness of Each Individual is Transforming Healthcare. His weekly video/audio podcast, The Gary Bisbee Show, pursues his interests in learning and leadership and features guests of significant accomplishment.
He has been a founder or leader of five venture companies. Most recently, he was Co-founder, Chairman and CEO of The Health Management Academy. He has been a member of multiple public and not-for-profit boards, and he currently sits on four boards, including Cerner Corporation. He is an advisor to investment funds.
Gary holds an M.B.A. in finance and healthcare from the Wharton School of the University of Pennsylvania, and a Ph.D. in chronic disease epidemiology from Yale University, where his dissertation was part of the development of DRGs. His undergraduate degree is from North Central College.

Burnout or Burndown? How to Support Health Professionals
00:00
00:00