EP. 42 “I haven’t stopped learning.” And neither should you. Sheila Talton worked her way from the admin desk to the board room by stretching herself and always being prepared.

Laurie McGraw is speaking with Inspiring Woman Sheila Talton.  Corporate executive Sheila G. Talton was born on October 12, 1952 in Cleveland, Ohio. As a teenager, she became involved in…
July 12, 2021
Listen on your favorite player Take me to this show’s page

EP. 43 Find and pursue what excites YOU. Dr. Renee Bovelle has done just that.

EP. 41 If you’re not living on the edge, you’re taking up too much room.
Facebook Twitter Buffer LinkedIn WhatsApp

EP. 42 “I haven’t stopped learning.” And neither should you. Sheila Talton worked her way from the admin desk to the board room by stretching herself and always being prepared. 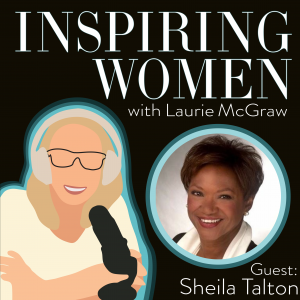 Corporate executive Sheila G. Talton was born on October 12, 1952 in Cleveland, Ohio. As a teenager, she became involved in the civil rights movement in Rockford, Illinois. Talton went on to graduate from Northern Illinois University with her B.S. degree in business administration and speech communications in 1980.

Upon graduation, Talton was hired as a sales trainee at NCR Corporation. She became head of Midwest sales for Data Group Systems in Chicago in 1982, moving on to a position as team leader in the sales department of Applied Data Research (ADR) in 1984. Taking advantage of a void left by the breakup of AT&T, Talton founded Unisource Network Services, a provider of voice, data and video networking consultation and support services, in 1987. In 1996, while still leading Unisource, she helped establish the Information Technology Senior Management Forum, a mentoring group that cultivates executive talent among African American IT professionals. Talton sold her stake in Unisource in 2000, and was hired as the vice president of Cap Gemini, Ernst & Young’s Midwest technology consulting practice. In 2002, she was named president of global business innovation services for Electronic Data Systems (EDS). Talton was hired by the computer networking company Cisco Systems Inc. in 2004 where she became vice president of advisory services in the Customer Advocacy Group. She was promoted to a role as vice president of Cisco’s Office of Globalization in 2008 and helped the company identify growth opportunities in emerging markets around the world. She left Cisco in 2012 to found the consulting firm SGT, Ltd. In 2013, Talton established Gray Matter Analytics, Inc., a business providing consulting services and cloud hosting service for analytics.

Talton has served as a member of the board of directors of the ACCO Brands Corporation, the Wintrust Financial Corporation, the Chicago Shakespeare Theater, the Northwestern Memorial Hospital Foundation, the Lighthouse for the Blind, and the Rensselaer Polytechnic Institute. Her honors include selection as a Congressional appointee on the US White House Women’s Business Council, as one of the “Top 10 Women in Technology” by Enterprising Women, and as “Entrepreneur of the Year” by the National Federation of Black Women Business Owners. She is also a recipient of the “Entrepreneurial Excellence Award” from Working Woman magazine and a Dr. Martin Luther King Jr. Legacy Award. She was named a 2007 “Woman Worth Watching” by Profiles in Diversity Journal, received a 2008 Egretha Award from the African American Women’s Business and Career Conference, and was named a 2009 Business Leader of Color by Chicago United. In 2010 she was honored as a Woman of Achievement by the Anti-Defamation League, and as the Outstanding College Alumni of the Year by the Business School of Northern Illinois University. In 2011 she was named one of “25 Influential Black Women in Business” by The Network Journal and received the “Diamond Leadership Award” from the Information Technology Senior Management Forum.