EP. 39 This Swiss Shark uses a winning formula to build companies and evaluate them when they come to the Tank.

Laurie McGraw is speaking with Inspiring Woman Bettina Hein.  Bettina Hein is a serial software entrepreneur that has built technology companies in both Europe and the United States. She is…
June 28, 2021
Listen on your favorite player Take me to this show’s page

EP. 40 Dr. Bridget Duffy took that good advice, faced her fear of public speaking and began to use her voice.

EP. 39 This Swiss Shark uses a winning formula to build companies and evaluate them when they come to the Tank. 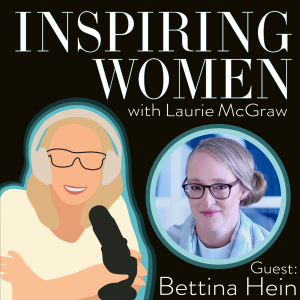 Bettina Hein is a serial software entrepreneur that has built technology companies in both Europe and the United States. She is most recently the founder of digital health startup juli, her third software company. She is also the founder of Pixability, a video advertising company in Boston. Prior to Pixability, Bettina co-founded SVOX, the Swiss-based speech technology company which was acquired by Nuance Communications (NUAN) for $125 million. Bettina has received numerous awards and recognitions such as the 2018 Immigrant Entrepreneur of the Year Award, World Economic Forum Young Global Leader, L’Oreal NEXT Generation Award, and The Boston Business Journal’s “40 Under 40 Award.” Bettina holds an MS degree from MIT, a law degree from the University of Constance, and a business degree from the University of St. Gallen. Bettina holds two software patents and is the co-author of Video Marketing for Dummies. She is also a “shark” on the Swiss version of Shark Tank called “Höhle der Löwen Schweiz.”

Connect with Bettina on LinkedIn