EP. 12 Stay in the Game. How being curious and treating every assignment as an opportunity led Donna Thompson to success.

Laurie McGraw is speaking with Inspiring Woman Donna Thompson, RN, MS, CEO of Access Community Health Network, one of the largest FQHC networks in the country serving 180,000 patients across…
April 5, 2021
Listen on your favorite player Take me to this show’s page

EP. 13 Dr. YiDing Yu describes the ingredients for explosive success: Care a lot, Work hard, Be good at what you do, and Bring your passion….

EP.11 From the White House to today’s hottest start up, Caitlin Fleming shares her best advice: Get in the room where it happens….
Facebook Twitter Buffer LinkedIn WhatsApp

EP. 12 Stay in the Game. How being curious and treating every assignment as an opportunity led Donna Thompson to success. 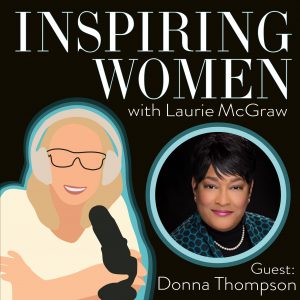 Laurie McGraw is speaking with Inspiring Woman Donna Thompson, RN, MS, CEO of Access Community Health Network, one of the largest FQHC networks in the country serving 180,000 patients across its 35 health centers in Chicago.

For more than 30 years, Donna Thompson has been on the front lines of patient care delivery. When Donna first joined Access Community Health Network (ACCESS) as Chief Operating Officer in 1995, she was very familiar with the difficulties that patients faced due to their lack of access to primary and preventive care. Now as ACCESS’ CEO since 2004, Donna demonstrates daily how a focused commitment to high quality community health care can save lives, revitalize communities, and preserve the possibility of a healthy life for hundreds of thousands of patients across the Chicagoland area.

Through its mission, ACCESS provides high quality, comprehensive community-based health care in the area’s most underserved communities. In her years as CEO, Donna has led ACCESS to become one of the largest federally qualified health center (FQHC) organizations in the country. ACCESS provides an integrative health home for patients in each of its 35 health center locations across the greater Chicago area, including suburban Cook and DuPage counties.
Under Donna’s leadership, ACCESS has developed a model of health care that helps patients navigate the gap between community-based care and other critical resources from vital hospital services to community support services. ACCESS has been continuously accredited by the Joint Commission since 2000 and received National Committee for Quality Assurance (NCQA) Patient-Centered Medical Home (PCMH) designation for each of its eligible health centers since 2015. Believing in the value of strong community partnerships, four ACCESS centers are co-located with other organizations, such as the Gary Comer Youth Center and the DuPage County Health Department, to better address resident needs comprehensively.
Strongly believing in an integrative health model that decreases the barriers to optimal health and wellness, Donna has successfully led ACCESS in redesigning its care delivery system with enhanced focus on care coordination that goes ‘beyond the walls’ while embedding resources that address food, transportation and housing. Understanding the complexities of the opioid crisis, ACCESS is also licensed in the State of Illinois for Substance Use Prevention and Recovery (SUPR) allowing for a more extensive integration of primary care with addiction disorder support and treatment.
Keeping the focus on providing solutions to health inequities, ACCESS has invested in long-term partnerships for teaching and research. ACCESS’ broad partnerships enable community-based research to address health disparities and to share those best practices within the community. In 2015, ACCESS opened its NIH-funded ACCESS Center for Discovery and Learning in Chicago’s Englewood community alongside a community health center and an integrative resource center.

As a community organizer concerned with effecting change beyond the health center walls, Donna organized the Stand Against Cancer program in 2002, bringing together more than 1,400 women, elected officials and faith leaders representing every religious denomination, race, ethnicity and age group to advocate for increased funding for breast and cervical cancer screenings. As a result of this advocacy effort, the State of Illinois allocated nearly $4 million annually to the Stand Against Cancer program, to reach women in faith communities to promote early detection and offer screenings and follow-up care for those who are underinsured and uninsured. While the State of Illinois terminated the program in 2015 due to the state budget crisis, ACCESS continues to advocate for reinstating the program.
On Mother’s Day in 2007, Donna launched Pin-A-Sister

, bringing together members of predominantly African-American and Hispanic congregations to recognize breast cancer survivors and provide education around the importance of breast health and regular preventive screenings. To date, this faith-based breast cancer awareness campaign has reached more than one million people in churches, community organizations and correctional centers during its signature events surrounding Mother’s Day and has touched more than four million individuals through media outreach efforts locally, nationally and, even internationally.

Other appointments and acknowledgments

Donna received her bachelor of science degree from DePaul University in 1986, as well as her master’s degree of science in nursing administration in 1989. Donna was named a Robert Wood Johnson Foundation Executive Nurse Fellow in 2003. She received the 2007 Chicago Athena Award for her leadership in developing community health and was recognized as one of Chicago United’s 2007 Business Leaders of Color. She is also a co-founder of the Metropolitan Chicago Breast Cancer Task Force. In 2008, Donna received the Chicago National Organization for Women’s Outstanding Community Leader Award. In 2009, N’Digo magazine named her one of Chicago’s most influential women. Donna is a 2010 graduate of the Kellogg School of Management’s CEO Perspectives program. She received the National Medical Fellowship Leadership in Healthcare Award in 2015. Donna is a DePaul University Board Trustee and also serves on the Boards of Directors of the DuPage Health Coalition in DuPage County, Il.; the National Public Housing Museum; and Children’s Home & Aid Chicago.