EP. 108 Doctor. Mom. Now Researcher and Entrepreneur. A race against time and all odds for Lucy.

Laurie McGraw is speaking with Inspiring Women Dr. Geri Landman.  She filled her lifelong dream when she became a pediatrician.  And then, life changed when Lucy, her third child, was diagnosed with a…
November 22, 2022
Listen on your favorite player Take me to this show’s page

EP. 108 Doctor. Mom. Now Researcher and Entrepreneur. A race against time and all odds for Lucy. 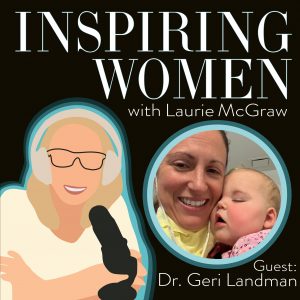 Laurie McGraw is speaking with Inspiring Women Dr. Geri Landman.  She filled her lifelong dream when she became a pediatrician.  And then, life changed when Lucy, her third child, was diagnosed with a rare gene disorder.  A missing PGAP3 gene.  How rare?  50 other children worldwide.  With a prognosis of severe disability and seizures and without a cure, therapies, or treatment, Dr. Landman took on new roles.  Researcher. Entrepreneur (Moonshots for Unicorns). Fundraiser. Advocate.  Mom first.

“They teach you in medical school, when you hear hoofbeats, think horses not zebras”.

Persistent parental questions led to – first – a feeling that she was overreacting as a parent.  Fortunately, there was a neuro geneticist on the team.  After many tests and exams – it was that call of “let’s talk in an hour” that changed the course of their lives forever.  Geri and her husband had never heard of the PGAP3 gene, let alone what it meant to be missing that gene, as is the case with their young daughter Lucy.  The prognosis included no cures, no therapies, and a difficult future of severe disability and seizures.  The missing PGAP3 gene – a rare gene disorder – affects 50 other children worldwide.  They gave themselves a week to absorb, to think.  Deciding they couldn’t cry forever, knowing they were in the Bay Area – a valley of science and world class medical centers – Dr. Landman and family began the daunting journey of finding a cure in the promising world of genetic science.

How to get involved:  Moonshots for Unicorns.

Dr. Geri O. Landman is a pediatrician in Berkeley, California and is affiliated with Lucile Packard Children’s Hospital Stanford. She received her medical degree from University of California (San Francisco) School of Medicine and has been in practice between 11-20 years.